Sustainable fisheries maintain healthy fish stocks and conserve the marine environment. They ensure that the amount of fish harvested, and the manner of their harvesting, do not deplete fish stocks or destroy the marine ecology for future generations.

To ensure sustainability of the ‘blue economy’, fish stocks need to be regularly assessed and harvest levels and methods effectively monitored. But the movement and life cycles of fish make this difficult. They travel over large areas of sea often straddling national boundaries. Their life cycles exhibit different vulnerabilities to fishing because of different growth rates, reproductive capacity and maturity age. Fishing methods affect not only species numbers and interactions throughout the marine food web, but also habitats and the seabed.

The European Union (EU) collectively manages these uncertainties to maintain the profitability of commercial fishing by setting the amount of fish caught through a quota system. This approach is widely supported by scientists, the fishing industry and other stakeholders. However, this leads to the wasteful practice of discards. Those parts of the catch returned to the sea because the fish caught are below the minimum landing size or the quota has been reached. Whilst the discards policy is being phased out, the EU’s management of fisheries has been weak with approximately 30% of EU fish stocks overfished. 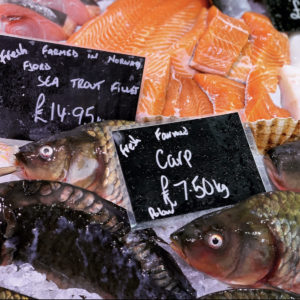 A further threat to sustainable fisheries is illegal, unreported and unregulated (IUU) fishing. They breach national, regional and international laws and is a global problem. It is estimated to account for one fifth of all ‘legal’ catches. The battle to control IUU focuses on preventing such catches entering the supply chain, but it is a battle biologists say is being lost.

There is no protection for any species outside a country’s 200 nautical mile (370 km) limit. Known as the high seas, this represents two-thirds of the world’s oceans. This lack of governance here threatens marine biodiversity. Leatherback turtle numbers have declined by 97% in 30 years. The North Atlantic right whale is perilously close to extinction and seabird colonies have fallen by 70% since 1950.

Threats come from ever larger container vessels disrupting marine ecology. Plus, more trawlers using hooked lines up to 75 miles long that ensnare many species, and plastic waste choking young seabirds. There are also newer forms of exploitation of the high seas through mining of the seabed. Deep-sea organism harvesting for genome sequencing by chemical companies looking for new medicines, food and cosmetics.

The UN is spearheading international efforts to protect the biological diversity of the oceans. In September 2018, a new round of negotiations began. The goal was to agree an overarching treaty that would protect biodiversity through the establishment of Marine Protected Areas and share the benefits of marine genetic discoveries with poorer countries by 2020.

It was agreed that the world’s largest Marine Protected Area would be formed in the Ross Sea in Antarctica. Commercial fishing would be banned and protecting nature would be the priority.